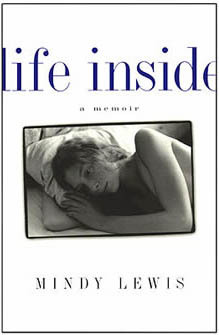 LIFE INSIDE: A Memoir by Mindy Lewis

In 1967, three months before her sixteenth birthday, Mindy Lewis was sent to a state psychiatric hospital by court order. She had been skipping school, smoking pot, and listening to too much Dylan. Advised by doctors, her mother placed Mindy in state custody until she turned eighteen. Life Inside is the story of the author's coming-of-age during those tumultuous years. In honest, unflinching prose, she paints a richly textured portrait of her stay on a psychiatric ward -- the close bonds and rivalries among adolescent patients, the politics and routines of institutional life, the extensive use of medication, and the prevalence of life-altering misdiagnoses. But this memoir also takes readers on a journey of recovery as Lewis describes her emergence into adulthood and her struggle to transcend the stigma of institutionalization. Bracingly told, and often terrifying in its truths, Life Inside is a life-affirming memoir that informs as it inspires.

"A moving, poignant and enraging, yet redemptive, account of one woman’s refusal to accept victimization, powerfully told in vivid, poetic prose."
— Publisher’s Weekly

2003 Book of the Year, American Journal of Nursing

“Mindy Lewis writes of her life with clarity, intelligence, and vivid, sometimes harrowing, detail. After reading Life Inside, I had to wonder about our world, to question our notions on normalcy and appropriateness, and to applaud Lewis for daring to tell her story.” —Ann Hood, author of Do Not Go Gentle

"Powerful, honest, poignant—Mindy Lewis's story compels us to travel with her down the path of a soul-wrenching journey. Glimpses of our own interior lives are unavoidable as she shatters the boundaries between the worlds that she inhabits and the one that lives within her." —Barbara Gordon, author of I'm Dancing as Fast as I Can

“Lewis’s emotionally complex, powerfully written memoir is fierce, honest, intimate, courageous, and—ultimately—healing to read, in its portrayal of one woman’s struggle to emerge whole from ‘life inside.’” —Janice Eidus, author of The Celibacy Club

"From twenty-seven months on the adolescent unit of a respected psychiatric hospital, Mindy Lewis emerges with the courage born of despair to confront the medical experts who, by pathologizing her youthful rebelliousness, relieved her—and themselves—of the responsibility of understanding it. In challenging us to think rather than be thought for, this brave book is a must-read for psychiatrists and laypeople alike." —Carol Hebald, author of The Heart Too Long Suppressed

"This is the remarkable adventure of a young woman, misdiagnosed and confined for more than two years at one of the premier psychiatric teaching hospitals in the nation, at a time and place of great professional self-confidence. While her apprentice doctors learned psychotherapy with her, she learned mostly from her friends and teachers. When she finally got out, she gradually turned her own experience of living into recovery. A great read, and a story of healing oneself from which we in the psychotherapy professions have much to learn."
—Christian Beels, M.D., former director, Public Psychiatry Fellowship, New York State Psychiatric Institute

What Readers Are Saying About LIFE INSIDE

"I'm a memoir junkie, and this is one of the most rewarding, carefully written memoirs I have ever read. Lewis insightfully describes each stage of her rich transition from searingly painful adolescence to self-actualized adulthood. I marvel at her narrative's double-voice: she accurately conveys both adolescent self-doubt and emotionally attuned adult wisdom. Readers who will particularly appreciate this book include lovers of well-wrought prose, and people who feel impaired by something in their past, and cautiously optimistic about their chances of getting over it and/or growing from it." — A reader from Washington, DC

"This remarkable work describes the harrowing, yet in some ways winsome experience of a remarkable child of the 60s raised in the home of divorced parents and forever rebelling against her 'perfect mother.' At the outset, Mindy is on her way to the institution that is to be her home for 2-1/2 years and most of this memoir is devoted to those times — a life inside with the others inside, those that are patients, those that are employees, and those that are the professionals. Mindy has gone through her medical records of those days and peppered her historical descriptions with the views of her psychiatrists as outlined in those records. The life inside is intimately and thoroughly described and one feels not only the horror, the bondings, and the feeling of abandonment, but also the eventual resignation. Mindy will come to terms with her issues, her parents and herself as described in the life outside that is the book's second portion. She comes to see 'the other side'. The memoir is written with remarkable sensitivity and emotional candor." —A reader from New York, NY

"This is the rare book that sends chills up the spine, tears down your face, and on multiple occasions make you laugh aloud. More importantly, this book made me pause and think deeply about the issues Lewis raises regarding the lines between sanity and insanity, the uses and misuses of various therapies and medications by the psychiatric community, and the long-term implications of a scarred adolescence. The author is not only an excellent writer, she is an incredibly brave person to have written such a book. Blows away Susanna Kaysen's Girl, Interrupted with its vivid portrayal of daily life inside a mental institution and its equally important depiction of what happens once you escape such a place (something Kaysen's book did not cover). Lewis's self-portrayal is honest and full, her characters are vividly drawn, and you really get a sense of what drove her mother, her doctors, her attendants, her fellow inmates, and herself to behave the way they did—creating a difficult situation and then enduring it. I'm giving this book to all my friends—even those who don't normally read memoirs—because Lewis' book is so much more than that."
—A reader from New York, NY

"Mindy Lewis cuts to the quick with chillingly direct no-nonsense descriptions of an adolescent finely tuned to the chaos of her day. A must-read." — A reader from Beach Lake, PA

"I am reading your book right now, and cannot put it down, no matter how hard I try. Reading it as a 15-year-old, I understand the 15-year-old Mindy and have a lot of the same thoughts, even though I've never been, and hopefully will never have to visit any sort of mental facility. However, I find myself being more and more philosophical as I grow up, feeling singled out every now and then because of the way I think and feel. Through a large portion of the book, I've found myself feeling like I am there with you in many of the situations you find yourself in. I cried during the entire "suicide" section, I felt like standing up and slapping someone when you were forced to sit through the stupid "sessions," and I smiled when things seemed to be looking up. I feel like I'm growing up to the book, even though our lives are almost completely different. Thank you for writing such a powerful and moving memoir. It is now my favorite book, and probably always will be." — A reader from York, Pennsylvania

"Life Inside is evidence that uniqueness is not a punishment but a blessing. It is a story that captures the beauty of individualism and the inner strength to overcome obstacles. Life Inside threw me deeper into my world, made me think more about my life and society's misperceptions, and realize that each person has power within her/him self, if they can only look deep enough to find it."
— E.M., Columbia, Missouri

LIFE INSIDE: A Memoir by Mindy Lewis
A moving, poignant and enraging, yet redemptive, account of one woman’s refusal to accept victimization, powerfully told in vivid, poetic prose.
—Publisher’s Weekly

DIRT: The Quirks, Habits, and Passions of Keeping House
38 contemporary writers dish the dirt on cleaning and housekeeping

LIFE INSIDE: A Memoir
Order DIRT from Amazon
Visit DIRT's blog
Visit DIRT at Seal Press
Clippings
Read clips of my published essays
Mr. Beller's Neighborhood
At Home on the Church Steps
ML's Happy Family on Huffington Post
Thank you, Rebecca Walker, for inviting me to post on your blog
Authors Guild
Loading…}